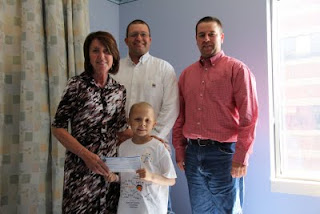 For the past several months the Canadian Angus Foundation has carried out the Red and Black Baldy Fundraiser. The challenge was issued to President Kirk Wildman, Rob Smith and me, to raise money with the highest fundraiser having their head shaved during the banquet at the 2011 Canadian Angus Annual Meeting in Clear Lake, Manitoba.

I am very proud of the level of support we received from the members of the Canadian Angus Association. We were supported by 145 different individuals, farms, families, and other agricultural groups. Many of these donors represent more than one person which makes this even more significant. It is now the most successful fundraising campaign in the history of the Foundation. When we initiated the campaign, I was skeptical as to the amount of money that we would be able to raise. I couldn’t believe that anyone would pay a wooden nickel to see Kirk, Rob, or me shave our heads in the middle of summer. It didn’t take long for me to realize that it had nothing to do with any of our hair. It had to do with the cause we were supporting in that everyone either knows someone or has been affected by cancer themselves and are very passionate toward the cause. The members of the Canadian Angus Association, whether they contributed to this campaign or not, should be extremely proud of this accomplishment. It truly shows the generosity and passion of everyone in the agriculture industry.