I am honoured to represent the Canadian Angus Association as the Saskatchewan fieldman. Here's what I've been up to this summer:

July 27
I travelled to Neepawa, MB to attend their summer Gold Show. The show was well attended by both spectators and cattle. A total of 77 head were shown before a three-man judging format. This was a pen show so it was a little hard to take pictures as winners did not come back after announcements. The committee told me they went to a pen show to try and boost entries or they felt the summer show may fail.

I stayed overnight with some friends and then Sunday toured Garbald Farms which is a purebred-commercial operation mid-way between Gladstone and Austin. This is a 350+ cow herd. The owner, Jan Garbald, came from Switzerland and started in Angus but thought that they did not have enough size so he began using Charolais bulls. When this wasn’t working, he switched to Simmental bulls and now he is back to Angus. He claims the other two breeds just couldn’t cut the wet ground and high moisture grass. So after a trip around the block he seems to be satisfied with his herd now.

August 1
I attended the Saskatchewan Gold Show in Prince Albert. It was a beautiful day, just a slight breeze and not too hot. There was a good crowd in attendance with many good cattle. I think the numbers may have been down a bit but the quality was sure there. I was able to have a little visit with Mel Sisson and Dr. Byrne Rothwell, both long-time Angus breeders.

August 29-30
These were the dates of the Sask Angus/CRAPS summer tour. This tour was held in the Wawota to Peebles area.

There were about 150 to 200 people that took part in looking at the cattle, socializing and the excellent meals that were provided. There were breeders there from Swift Current into Manitoba and north as far as Meadow Lake.

At the breakfast hosted by GBT Angus on the second morning, we had a presentation by Dr. Kim McLean, Livestock Specialist with the Saskatchewan government. Kim is the daughter of Dave Mclean of DM Angus at Arcola.

Her topic was: "Getting The Most From Your Cow Herd: Tools To Learn And Utilize".
The thrust of the presentation was on EPDs and Genomics. Most people were interested and there were some questions asked.
This was a great opportunity to spread the word about the Angus Tag Sale at Yorkton this fall. Watch for me at Angus sales across Saskatchewan this fall. Be sure to say hello if you're there. 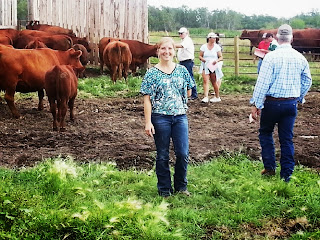 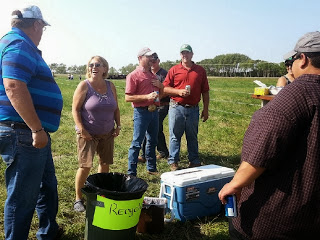 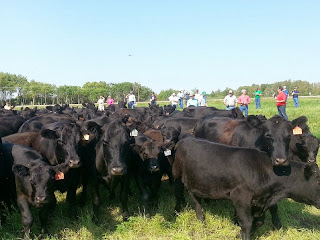 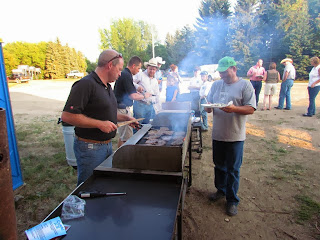