Convention Is Here… and gone!

Well, it's here at last. I’m sitting here at the CAA National Convention in Guelph, Ontario, about an hour before the start of our Rancher Endorsed Day. Last night we had the President’s Reception at the Arboretum, part of the University of Guelph. It sure was great to see all of the enthusiasm from our Canadian Angus breeders. We had an excellent set of speeches from the Junior Ambassador candidates, and are anxiously awaiting the announcement of the results on Saturday night.

Over the past week I’ve had the chance to visit four classrooms ranging from grade 3 to 6. The kids got very excited as I talked about the different sectors of the beef industry, and of course how they could get involved with this great breed and our Canadian Junior Angus Association. They especially liked the green “Angus tag” silly bands that I gave to them at the end of the presentation. There’s no doubt that this is an excellent way to promote our breed and Angus beef to youth.

Yesterday afternoon, after arriving here in Guelph, I sat in on the Can-Prov/CAA board strategic planning session that included CAA board members, provincial association presidents and secretaries and the CAA staff. This meeting lasted over four hours and was an opportunity for everyone to voice their opinion on what they saw as the priorities for improvement in our Association. This was a very constructive few hours, and no doubt everyone who attended is insightful about the future of our Angus breed.

We have 140 cattlemen registered for our Canadian Angus Rancher Endorsed Day today. What an event it promises to be with speakers from every sector of the industry, feedlot tours, and catered supper at the Erin fairgrounds. It’s very humbling to have so many registrations for Rancher Endorsed Day since marketing for the event has been a huge part of my duties over the past few weeks. Not only have I taken flyers to shows and sales throughout the province, but I have also contacted several media outlets to see if they would attend our event or run a story highlighting Rancher Endorsed Day either before or after the event. I was actually able to get a story and an interview run on three different radio stations for our event. I have no doubt that we reached thousands of people with this marketing campaign, and it’s clear that these efforts have paid off.

Somehow a week has passed. I’m back home from Convention now, and I think its time to reflect on what a great event it was. There is no doubt that the overall enthusiasm in the Angus breed is strong, and this was very evident throughout the week's events. Rancher Endorsed Day turned out to be a huge success, and everyone was very impressed with the speaker panel.  In the afternoon, we headed out for tours, and I think the crowd favourite was Heatherlea Angus, where the focus was on homemade and farm fresh goods! After the tours, we had an excellent meal at the Erin fairgrounds.


Throughout the day, the Junior Ambassador competitors sold Angus Tag raffle tickets for a big screen TV donated by our tag supplier Allflex. After supper, the winning ticket was drawn, and Tammi Ribey won.


Saturday was another excellent day at Convention. It started with the unveiling of our incredible new logo, followed by breakout sessions put on by CAA staff members. My session was focused on Canadian Junior Angus Association opportunities. I think all of us staff felt that our sessions were very engaging to the audience as we all faced excellent questions and discussion upon conclusion of our presentations. After the sessions, there was a short break for lunch and then we went straight into the Canadian Angus Association (CAA) and Canadian Angus Foundation (CAF) annual general meetings. Typically when you think of an AGM, you probably can’t imagine it being fun, but I was amazed at how exciting and interesting it was to watch our CEO and President reflect on the many milestones that our breed achieved last year. There were awards presented and the new board was introduced, including new President Kevin Blair and President Elect Corinne Gibson. With the AGM taking up most of the afternoon, we staff had lots to do to prepare for the Building The Legacy II Sale while the Ontario organizing committee put the finishing touches on the Convention banquet.

I find myself lost for words to describe The CAF Building The Legacy II Sale. I can hardly believe that so many of our Canadian Angus breeders are so supportive of our Foundation that they were willing to donate such incredible genetics and memorabilia to this sale. As our CEO said, this could have been one of the most incredible compilations of breed leading and rare Canadian Angus genetics to ever be sold in one sale. The offering didn’t just include frozen genetics as we even had a pick of the 2013 LLB Angus heifer calves donated by Lee and Laura Brown. It’s easy to tell that breeders “dug deep” to find the BEST genetics they could put on offer. We also had an incredible sale crew who donated their time and expertise to the cause. At the beginning of the sale, Rob Smith gave a brief introduction and announced Chad Lorenz as our new Junior Ambassador. He then asked me to come up and speak on behalf of the New Zealand youth team members about the incredible opportunity we have coming up this fall at the World Angus Forum. This was an easy task for me, especially since I’m so passionate about this incredible CAF fundraiser, and the huge (and growing) impact that the CAF is having on Canadian Angus Juniors. If you didn’t already know, the CAF is funding our youth teams as they travel across the globe to compete at the World Angus Forum this fall. In the end the sale was a smashing success, grossing over $70,000 for the Foundation. Everyone involved with the sale needs to be so proud of their efforts… there’s no doubt that they all paid off!

Sunday morning consisted of the board's organizational meeting and a meeting for all of the New Zealand youth team members who attended Convention. After lunch we departed for the farm tours. Our president and past president couldn’t make it to the bus in time for our punctual departure so they had to find another means of getting to the farm. At least it gave everyone on the bus something to joke about on the ride.

Our first stop was at Grist farms, a small Angus operation on a beautiful scenic farm. We had a chance to hear about their operation, and then a representative from Gallagher Fencing showed us an impressive new electric fencing product called electra-lock. I thought this was a neat idea, and it didn’t seem too terribly difficult to install. From there we hopped back on the bus and headed for Locust Grove Angus. There we saw cattle displays from multiple seedstock operations and had supper provided by Hero Certified Burgers. There was also a teat and udder scoring competition put on by our Director of Breed Development Kajal Devani. This was an excellent challenge for breeders and it was apparent that they enjoyed it quite a lot.

Monday was another incredible day, and I think one of my favourites. The bus departed in the morning for Niagara Falls. On our way we stopped at the Forty Creek Distillery, and then headed for Niagara-On-The-Lake. After a Spanish buffet for lunch, we had a couple hours to shop and enjoy the town. After that we hopped back on the bus and travelled to the Chateau des Charmes winery. This place was really “done to the nines” as it was clear that no expense was spared in the making. We then headed off to Niagara Falls for the remainder of the day. A group of us decided that we wanted to go on the Maid Of The Mist tour, and as you can tell by the picture… we got wet!! 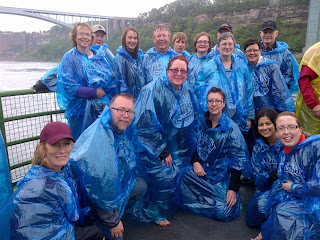 What fun we had, and what an excellent view we had of the Falls. Afterwards a group of us had supper at the Hard Rock Cafe, and then loaded on bus one more time to return to the hotel.

The next morning I dropped off the last load of staff and board members at Pearson Airport, and then headed for home myself. There is really no single word that I could use to adequately describe National Convention, but it was truly an incredible event. I am so grateful that I had the opportunity to attend, and I’m thankful for all of the friends and great breeders that I met throughout the event. Although this is a very long blog post, it seems only fitting for this event-filled weekend that I spent at the 2013 Canadian Angus National Convention in Guelph, Ontario. It's definitely one for the books!

See you on the road.