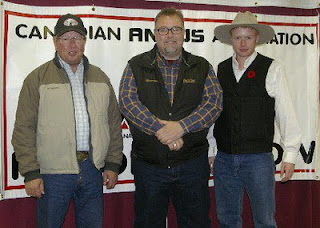 On November 4th I boarded a plane which would lead to a whirlwind adventure with Rob Smith and David Bolduc. First stop was Winnipeg to meet up with my Alberta counterparts and rent a car to travel to the National Show in Brandon. I was proud to Show off Brandon’s Keystone Center to Rob and David. Barns, show rings, restaurants, convention halls, the Wheat Kings, and our hotel all under one roof. I remember David saying I wish we could pick this up and take it to Calgary.

We attended the Manitoba Beef Producers supper that night had a delicious Certified Angus beef supper. The next morning I awoke early to help tie cattle in and got to tour the barns and visit with breeders. I helped out at the show by handing out banners to the champions. Congratulations to 6 mile for winning Grand Champion Female in the Red and Black Angus show. We had to leave early and I did not see who won Grand Champion Bull.There were some tense moments as we were driving back to Winnipeg to make our flight when a detour took us right through the middle of Portage Le Prairie.

We arrived in Toronto to our Beautiful Hotel in the shadow of the CN tower. This was my first time being outside of the Toronto airport and I was excited to see the city. The next morning I got on to the wrong shuttle bus to go to the Toronto Royal but ended up getting there in good time all the same. The show was spectacular, with competitors from Indiana to the Maritimes, Quebec and Ontario. The 4-H junior show was going on all afternoon in the next ring which was very entertaining. That evening I met George Earley from Ontario who toured me around the Hall of Fame before I met up with David and Rob in the Angus Barn.

The next morning we got up early and boarded our planes back to the frozen prairies that had been engulfed in winter since we left. In two hours I will be boarding a plane for Edmonton and Farmfair international. Hope to see you there.