Fall Highlights from the Field Staff

As southern Alberta remains in the nasty grip of winter, we'd like to share some highlights from our field staff during the fall sale season: 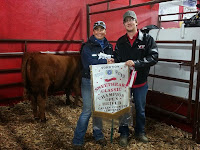 
The Grain Millers Harvest Showdown was held at Yorkton, SK October 31-November 2. This was the 25th Anniversary for this show. The show is treated as a commercial cattle show with all cattle being shown on the loose from pens. The “Angus Tag” class was for bred heifers only, the first of its kind in Canada and although small for the first year, it was very well received and there has already been talk about having it again next year. There was one pen of five bred heifers and six pens of three heifers. Twenty-three bred heifers averaged $1,672.40.

On August 31 I attended the Autumn Angus Classic sale in Hanover, Ontario. This sale featured both red and black cattle. 77 live lots grossed $220,325 to average $2,861. There was keen buyer interest at this sale with some elite cows and bred heifers on offer. Blacks sold exceptionally well with a somewhat softer market for red Angus genetics. High seller was Soo Line Pride 0404 consigned by Gold-Bar Livestock, and purchased by Bushbeck Angus Ranch for $8.600.


On September 15 I attended the Brampton Preview Gold show in Brampton, Ont. The day started with the Ontario Junior Angus Show in the morning prior to the open show. With nearly 50 juniors pre-entered in the competition, it was a sight to be seen. There were also some incredible photos, scrapbooks, and marketing pieces on display. Congratulations to all Juniors for doing your association proud. The open show commenced in the afternoon, and it was judged by Dwight Koyle, who runs a 60 cow, purebred Limousin and Simmental operation at Iona Station, Ontario. $2,500 was awarded to both the top female and the top bull. This award was sponsored by Vos Vegas Farms in honour of the late Ross Bailey. Congratulations to Kemp Bros Farm for exhibiting Champion bull with Kemp Brothers All The Way 8A and Worth-Mor Cattle Company for exhibiting the champion female with WMC Shakura 4Y.

October 5 took me to the Eastern Extravaganza sale at Curraghdale Cattle Co. in Uxbridge, Ontario. Here 61 live lots grossed $185,600 to average $3,042. The sale featured Black Angus cows, heifer calves, and bred heifers, with no bulls on offer. High seller was a bred heifer: Kemp Bro’s Ms Zara 5Z consigned by Kemp Bros Farms and purchased by LLB Angus for $6,000. It is also worth noting that the maternal sister to the supreme champion female at Brampton sold in this sale: Worth-Mor Shakura 3A. She demanded $4700, selling to Evan Fox. It was a beautiful facility with tremendous hospitality.

On October 6 I travelled to Blackstock, Ontario for the Autumn Tradition Angus Sale at Maple Line Farms. 55 Black Angus Lots grossed $127,875 to average $2,459. This sale featured a large offering of herd bull prospects, several cow-calf pairs and some yearling heifers. High seller was Southview Favourite 12Y consigned by Southview Farms and purchased by LLB Angus for $4,300. This was a well-attended sale on a very wet day!

It has been an honour to travel on behalf of the association this fall. I look forward to continuing to see our membership at major shows, sales, and events.


BC Update
Courtesy of Jack Brown


The month of October started with a request from a commercial breeder in the Fraser Valley for 20 Red Angus heifer calves. I gave him the number of some breeders that I had contacted, in the end he bought some red heifers at the Williams Lake Sale.

On October 22, I was in Kamloops for the calf sale, 2400 head of cattle were on offer that day. The prices were steady, 6 weight calves ranged from $1.50-1.60. The jacket draw was won by Inter Valley Angus of Chilliwack. The sale was well attended with at least 6 buyers bidding on the cattle.

The sale in Williams Lake is always a feature sale as it is always lead off by the Gang Ranch calves. They are very uniform calves; the weight on 3 drafts only varied 8 pounds. The sale yard was bulging at the seams as they sold 4,000 head of cattle over 2 days. The jacket was won by Gordon and Sandra Fouty from west Quesnel. The crowd was small, but it was forever changing which gave me the opportunity to visit with several ranchers.


On to Vanderhoof for the sale on October 25. This sale was a presort sale of 3100 of calves only. The sale started with the first lot of 262 head of steer calves that weighed 488 pounds and sold for $1.71. Once again the yard was full and this created a few penning problems. Once again the price was strong and holding. The jacket winner was Jim & Louise Feragan of Prince George.

The sale at OK Falls on October 28 saw 1140 head of cattle with some outstanding calves. Once again it was a beautiful day, which made it very pleasant for the penners. The jacket winner there was Fossen Air Ltd. Doug Fossen being the recipient.


On October 23 I went to the auction mart in La Guadeloupe loaded with CAA coffee cups for the early birds. I received a warm welcome and proceeded to introduce myself to the staff and buyers. La Guadeloupe is the smaller auction house of the three and youngest in the Angus feeder sales, but it has an enthusiastic outlook of being able to market Angus/Angus influence calves. There were a few pens of F1’s and black hided cattle but the green tags were not abundant this day. The onlookers and cattle producers present also welcomed my attendance and I gave out a few business cards which did result in later phone inquiries on green tags and Angus membership. I found it to be a very educational and interesting day.

October 24 I headed for Sawyerville. Arriving before the bidding I set up the rollup, introduced myself and made a tour of the facilities. Approximately 1,800 head went through the auction that day and I noticed a significant number of Angus/Angus influence calves mostly showing their green tags. I was accompanied by Hugh Ross for a portion of the sale and we were advised of 2 other Angus cow and heifer sales coming up in the near future at this auction mart.