T'was The Night Before A Cattle Show

It was the night before showing and all down the aisle

Exhibitors are prepping after travelling miles.
After finding the area where they will be stalled,
Parents and children start unpacking, what they've hauled.

As the cattle get comfortable, and snuggle up in a row,
A cute little peewee walks by with her hair in a bow.
When all of a sudden the announcement comes through
"Bring your entries to office, we need them. Thank you"

Away to the show office they flew in a flash,
With papers in hand, as well as their cash.
Exhibitors organized their show numbers with care,
As in the morning, there is little time to prepare.

The morning came quickly, a bright sunny day.
The cattle are groomed as they munched on their hay.
For some its time to get dressed in their best,
While others stay back and continue rest

From shirts to belts, everyone has their own style,
But mom's always say the best thing is a smile.
The announcer comes on, into his mic he's blowing,
"The judge has arrived, come on let's get showing"

They were judged by more than a glance while in hand,
And only a champion would advance to be grand
He's first, she's second, they're third. Who was placed?
Class winners were announced but all showed with such grace.

Despite the longs days there is no other place,
For it's not the banners or ribbons we chase.
It's not for the fame or the awards we think of,
Cattle shows are really about the people and animals we love. 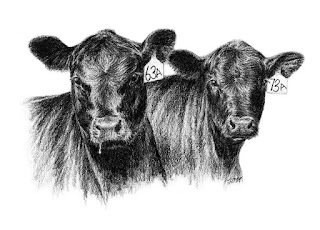 ‘Twas the night before Harding, when all through the grounds,
Not a creature was stirring, not even the hounds.
The cattle were stalled in the barns with care,
In hopes that 'Harding State Fair' soon would be there.

The children were nestled all snug in their beds,
While visions of red ribbons danced in their heads.
Both farmer and wife sat out by the stall,
Relaxing with a cold bevy after such a long haul.

When down the road there arose such a clatter,
Everyone looked to see what was the matter.
With one final swig, farmer rose from his chair,
Wondering what gave his show string a scare.

The pink and gold sky gave just enough light,
For the farmer to see a very strange sight.
A rusty ol' rig came through the dust,
Packed to the roof about ready to bust.

The driver’s tanned arm propped up on the door,
It had to be Jimmy, the farmer was sure.
Unloading in the dust his spunky heifers came,
And he whistled and shouted and called them by name...

Then with a loud bang the trailer door shut,
The last heifer taking off like a dumb nut.
Up from their chairs the farmers arose,
As the heifer came running from down below.

She was red and white with stubby little horns,
Her Hereford curls covered in dirt and thorns.
Her head was still shaggy; not even clipped,
As she ran into the barns, Jimmy came with a show stick.

The look on his face was clear as can be,
He was about to show this heifer who the boss would be.
He reached forward with his show stick,
Grabbing the halter; making it look so slick.

The heifer pulled back not knowing what to do,
As little Jimmy prepared for round two.
Everyone stood still and open eyed,
When they made it to their stall and no one died.

Jimmy unloaded his tack just before dark,
Hoping to get some sleep before the morning light sparked.
With one last check and everyone settled in for the night,
He parked his truck and trailer over by a near light.

He jumped into his back-seat make shift bed,
With the same old sweater to put under his head.
He shut his eyes and dreamed the same dream;
Not knowing the next day, he would qualify for the RBC Beef Supreme.

Legacy of the Aurochs


In 1627, the last aurochs died in Poland. The largest mammal to walk on the European Continent after the demise of the Woolly Mammoth, their population was brought down by increased domestication, interbreeding, disease and old age. But their lineage has not fallen to the same fate; aurochs genes are alive and well on almost every continent on earth. So what, exactly, is an aurochs? 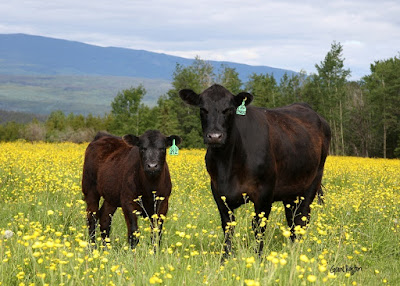 To answer this we must look at an animal that is well known to anyone reading this blog: Aberdeen Angus Cattle. Today, they stand among the top beef producers in the world (arguably often leading the charge), with a renown exemplified by the careful selection that goes into their breeding and upbringing. Yet I often can’t help but wonder when I look at an impressive Angus bull or a group of newborn calves…where did it all begin?
I’m not going to lie, my background in agriculture and ranching is pretty limited. I fortunately do not fall into the category of young people who have never seen a cow, but my childhood experiences were pretty well limited to our local rodeo and the herd of Herefords that were always released up behind my house in the springtime. Those large, lumbering beasts would come in waves around the back fence of our property, and on occasion we would be woken in the middle of the night by a cow who was mournfully mooing for her lost calf. One hot summer, two of my friends and I hopped on the ATV and went for a ride up the old logging road behind my house, only to come across the herd grazing calmly in a clearing. Little did we know that, for them, an ATV often meant fresh hay, and we were chased out of there by a stampede of what must’ve been very eager cattle anticipating a treat we didn’t possess. 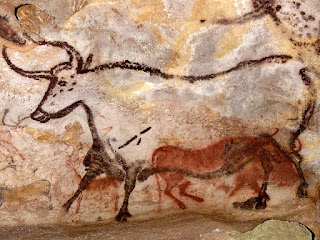 As an Art History and Visual Studies major, I’ve spent a lot of my time (and education) evaluating images and researching the history behind events, people and art. If I go as far back in my memory as Art History 101, among the initial classes I ever took at University, the first images I studied were of the bulls painted on the walls of the Lascaux caves in France. It’s remarkable the information you can accumulate, and my understanding of cattle became much more in depth the further I strode into my degree. One need only think of the myths of Greece and the Minotaur or of the bull-headed Apis God of Egypt to see that cattle have been revered for thousands of years. But, as I discovered last summer, the selected breeding for the Aberdeen Angus cattle only began in the mid-to-late 19th century. So what, exactly, were they selected from? 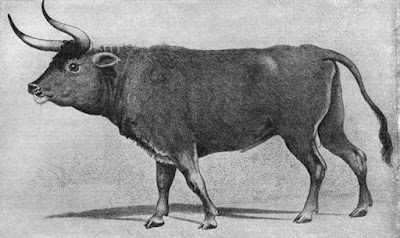 This is where the aurochs come in. Although the last pure aurochs was registered as extinct in 1627 (and was, in fact, the first animal to ever be official recorded as such), their genetics had been bred into the local breeds of domesticated and significantly more docile cattle for generations. The often six foot high, lean, aggressive and intimidatingly horned aurochs did not allow nor generate an appeal for domestication by themselves, but by breeding selectively for their more appealing traits – i.e. ruggedness, size, and local environmental adaptation – they were prime genetics. Subsequently, the aurochs gene can be found in every single breed of cattle on earth, with yak, gayal and Bali cattle being the only exceptions. In fact it is the aurochs that all first-year Art History students will see when studying those caves in Lascaux.
Today, scientists are attempting to ‘back breed’ present-day cattle in order to revive the aurochs. An exact replica will never be possible, but the newly labelled ‘Taurus’ cattle come mighty close – with significantly reduced aggression. Long legs, lean bodies, curved horns and elongated faces are starting to roam the European countryside in an attempt by conservationists to help the ecosystem get back on track. Their grazing on tough plants inedible to other species and heavy tread help keep grasslands available and plant species in check. 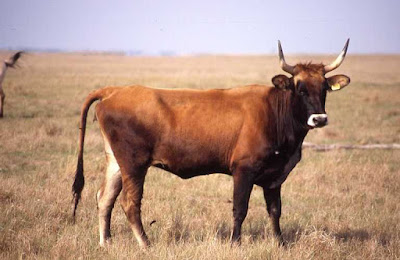 As for our beloved Aberdeen Angus? Well, let’s just say that their pleasant demeanour, excellent meat quality and stocky stature are not quite fitting for their European counterpart. They’ve come a long way from the ancient aurochs, and - along with innovative breeders - have created a legacy all their own.

Written by Kiani Evans
Posted by Canadian Angus Association at 11:26 AM