January - Did You Know?

CAA wants to recognize membership for their highlights in the industry. By doing so, we will share a monthly blog about our membership entitled "Did You Know." We back tracked to the summer of 2011 for our first "Did You Know" blog. It can be found at Feel free to submit "Did You Know" postings about yourself or others to Rob Smith at rsmith@cdnangus.ca

· Darren & Joanne Unger and family, U-2 Ranch at Coaldale, Alberta, were featured on the cover of the July 2011 Alberta Beef magazine with a great feature article. Read more at http://www.u2ranch.ca/pdf/Alberta%20beef%20magazine%20article.pdf

· Retired CEO Doug Fee has been appointed to the Board of Directors of Canadian Western Agribition.

· AgriDigest has given effective coverage to our presentation of the Eastern Feedlot of the Year Award. Please see http://agridigestonline.advancedpublishing.com/DigitalAnywhere/viewer.aspx?id=9&pageId=1 and go to page 9 for the story.

· Wynne Chisholm, a Calgary Stampede Director, is featured as the cover story for Alberta Beef’s August 2011 issue. Wynne’s W.A. Ranches, north of Cochrane, has more than 700 Angus-based cows on 12,000 acres. W.A. Ranches is where the University of Calgary Veterinary Medicine students receive their ‘hands-on’ training.

· Chelsey Carruthers, who presented at the Technical Conference of the 2009 World Angus Forum, has been published. Her “Comparison of Angus cattle populations using gene variants and microsatellites” appears on pages 81 – 85 of the March 2011 Canadian Journal of Animal Science. http://pubs.aic.ca/action/showMultipleAbstracts

· Mar Mac Farms - Blair, Lois, Brett and Melissa McRae - were featured in the July GrainNews and August Cattleman for their enrollment in the Verified Beef Program. Way to go, McRae family!

· The 2011 SEMEX Beef photo contest winner is from Quebec and is of black Angus cattle. The winner of the 2nd Annual Semex Alliance Beef Photo Contest is Francis Gagnon of Chénéville. http://www.ciaq.com/news/news-items/2011/2011-semex-beef-photo-contest-winner-from-quebec.html

· The post-Agribition edition of The Western Producer is chockfull of interesting Angus news, from the headline “Angus, Charolais reign supreme” on the cover adjacent to Bernadette Legaarden’s picture with the Charolais Supreme Champion Bull to the Farm Living article on Page 75 talking about the Herbert/Loree family at Nanton and their grass-fed ranch-raised beef program using Angus bulls. In between there are pictures and articles talking up our success and that of our people including the Kehler Stauffer Water Awareness advertising feature and the feature article on Danny & Conna Warrilow’s $67,000 –half interest bull calf selling in the Masterpiece. It is quite heartwarming to read that this sale at Agribition 2011 is, “… the highlight of the Warrilow’s career…” http://www.producer.com/issue/december-1-2011-the-western-producer/

· Sheldon Kyle, Kenray Ranch adorns the cover of the December Saskatchewan Cattlemen’s Connection as “The New Face of the Cattle Industry”. http://www.saskbeef.com/images/stories/2011/PDF/PROOF_LR_CattleConnection.pdf.

· Arleta Bowhay, 19, is Miss Rodeo Canada for 2012. A high profile, former 4-Her, Arleta hails from an Angus / Simmental cross cow/calf operation near Sundre, AB. Arleta is the daughter of Jim & Nola Bowhay. http://www.missrodeocanada.ca/

· The Reserve Grand Champion of the Carcass Competition at the 2011 Canada’s Outdoor Farm Show in Ontario was an Angus/Piedmontese from Dave & Rose Stewart of Winchester, ON. This event bills itself as “Canada’s Largest Agricultural Trade Show” with 723 exhibitors and 42,600 attendees.

· The November Alberta Beef features a cover story on Westman Farms, an intergenerational farm at Vermilion with 700 Angus/Simmental cows. Westman Farms have factored prominently in the ‘winner’s circle’ at the Farmfair and Agribition commercial pen shows in recent years.

· The December 8th edition of The Western Producer features a great story on the Wilson family of Miller Wilson on Page 76. I learned something; I didn’t know Ty was a massage therapist! http://www.producer.com/issue/december-8-2011-the-western-producer/

· The January 2012 Beef Illustrated features an interesting story entitled “Build beef quality, profit” on pages 16 and 19 citing Charlie Fullerton from Pincher Creek, SK “who uses Angus bulls on black and black baldy cows…” and feeds out his cattle at Western Feedlot. According to Charlie, his improvement in grade from 50 percent AAA to 75 percent AAA is based partly on “…adding more Angus genetics.”

· The first Cattlemen magazine of 2012 informs us that Bill Pryor, a 50+ year CAA member from Williamstown, Centreville was inducted into the New Brunswick Hall of Fame last November. http://www.canadiancattlemen.ca/

· We must be proud of our Canadians who definitely represented our nation well at the recent National Western Stock Show in Denver. Six Mile Red Angus, Lazy MC Angus, Blairs.Ag, Northline, Hamilton Farms, Justamere, Soo Line, Miller Wilson and Gilchrist Farms totally did us proud both on the ‘Hill’ and in the “Yards’! http://www.angus.org/show/ShowResults.aspx

· Here is a YouTube link of the “Ranchos de Hoy’ program. The video is in Spanish since it was presented on Mexican Television but we certainly know the people participating on this program: Hector Robles, the owner of the ranch “El Troje” in Jalisco, with Black Angus cattle, and Bill Estrada, president of the Angus Association of Mexico participates on this TV program as well. Remember they are hosting us in 2015 for the World Angus Secretariat. http://www.youtube.com/watch?v=0guvAIefXB0&feature=digest_wed

· Further, if you missed the Rick Mercer Report feature on Agribition on the CBC network Tuesday, December 6th, 2011, it is available on YouTube at http://www.youtube.com/watch?v=yBJoFheEYuA. It does nothing to promote Angus, but it’s kind of cute; a pleasant five-minute diversion. And it does feature some of our people!

· The CAA hosted over 100 people at our annual Christmas Open House, featuring
representatives from all of the following:
Posted by Rob Smith Feedback: cdnangus@cdnangus.ca
Posted by Canadian Angus Association at 3:21 PM 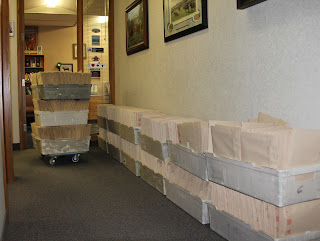 Over the weekend, association staff members (and some special younger helpers) completed one of the biggest tasks of the year. The Spring 2012 Herd Inventory mailing was prepared and will be in the mail today. These envelopes are prepared manually and there is one for each member (or family as we try to combine as many as we can). It was a very successful day; we finished in record time and even had fewer paper cuts than normal.

These packages contain your Herd Inventory and Application for Registration worksheets, Heifer Exposure worksheets (performance herds only) and some very important information regarding programs and services offered by the association. Members who are set up to receive Worksheets electronically only will still receive a package to ensure all members get the information. 2012 Fall Inventories will be prepared and mailed in July for anim 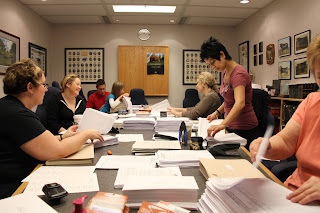 als expected to calve after June 1. If you have purchased a female who does not appear on your preprinted inventory, it may be because the transfer was not completed as of the date the inventory was prepared. You can check online to see if the transfer has been complete then add any of those females to your inventory. Please take the time to read through the packet and contact us if you have any questions.

Posted by Cheryl Hazenberg Feedback: cdnangus@cdnangus.ca
Posted by Canadian Angus Association at 8:41 AM