It’s hard to believe three weeks have already flown by and it is my turn to provide an update again! Looking back it doesn’t seem possible that I have accomplished everything I have. Given the proper resources and efficient execution, I have managed to visit 11 achievement days, East & West Central Regional Heifer Show and six schools in the last two months.

I cannot reinforce how much I have loved being in the classrooms. Not only have I enjoyed developing the presentations themselves but seeing the interest from children who know little to nothing about cattle or 4-H is uplifting. Through my visits I have had the opportunity to tell students about my involvement which has always been such a huge part of who I am and have grown up to be. I wish to thank Forestburg School for inviting me back to talk to some of the younger and older students as well as Amisk, Hughendon and Crossfield who were so welcoming and asked so many excellent questions. I wish to encourage all our Juniors to keep sharing with their classmates and friends about all the opportunities 4-H and the CJAA have provided them.

This opportunity to talk to Junior members as well as students has helped me solidify my career choice as an elementary school teacher. I have talked to kids from age 5 to 15 and through this I have been enthralled in the younger classrooms and cleaver kids. The plain innocence and interest these children have in everything someone may tell them or ask them is so rewarding. It goes without saying that some of the comments I have received need time to process, as there is not much thought before sharing. I adore how excited a seven year old is when they remember how many stomachs a cow has. I will never forget the girl who would have told me about Rosie the whole 40-minute presentation if her teacher would have allowed it. These experiences have been huge for me as I have been making many contacts and having practical experience in numerous classrooms. Not to mention that I have had a teacher encourage me to apply for my practicum at their school.

I have completed my adventures to 4-H achievement days at this point and it is really great to see the enthusiasm of our youth in Alberta. I have had the chance to judge at many of the shows as well as ring and even become official photographer at my home achievement day of Flagstaff. I am thankful for these opportunities to give back to a program which was a big part of how I grew up. The benefits of programs like 4-H and the Canadian Junior Angus Association are an asset to our young agriculture advocates' success and as CAA members we are proud of these Juniors' accomplishments.

There are some Juniors that I would like to thank especially for their utilization and promotion of Canadian Angus genetics including Keely Adams who won Flagstaff Achievement Day Champion Female with her cow/calf pair, and Tyler Dietrich who followed with Reserve Champion Female with his cow/calf pair. In fact, the whole female championship class for this district were projects exhibited by Canadian Angus Juniors as Keely’s heifer won the district and  Halley Adams (obviously teaching sister Keely everything she knows), was reserve champion heifer of the district. Halley and Keely Adams and Tyler and Gus Dietrich also won showmanship and grooming for their age categories for the district.

At Kneehill District Achievement Day there were a whopping 60 out of 75 market steer projects with Angus genetics which was great to see. As well, Maria and Sabrina Kooistra of the Cheadle Club dominated in showmanship and grooming at their district achievement day in Rockyford at the halter of their Angus steers. It goes even further than the club level however, because East & West Central Heifer Show was no exception. Cache McLerie’s cow/calf pair and a heifer from Kendall Janssen received champion and reserve champion honours respectively with animals of Angus cross genetics. Dakota Townsend won the purebred side with her Angus cow/calf pair and Halley Adams followed with her Angus heifer in reserve. Halley and Dakota also won aggregate for junior and senior categories showing that these Juniors have expertise in and out of the ring. It is huge to see Junior members with a passion for the breed being so active and successful. It is safe to say the breed is in capable hands, and this summer we are sure to see some of these exceptional projects exhibited as well as many more. There has also been various club and district champion steers at many achievement days I have visited. For more details check out my twitter account, @katesdietrich or the @cdnangus account, which features many of these announcements as retweets. 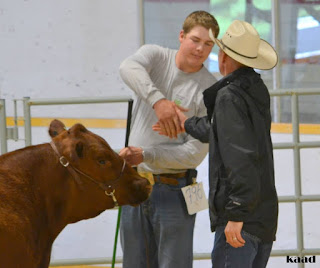 Looking toward the next two months' activities, I am quite excited; Summer Synergy and the Calgary Stampede are both in the next couple weeks and Showdown is around the corner. Based on the quality of Angus Juniors and the cattle I’ve seen in Alberta alone, I cannot wait to see what the rest of Canada has to show off. Be sure to keep visiting www.cdnangus.ca as Karla, Matt and I will also be collaborating to produce a couple more videos on our YouTube account. I look forward to the latter half of my journey as a Canadian Angus Association intern and cannot wait for what the next months bring!

4-H on Parade and School Presentations

Things have been really picking up for us in terns! Matt has been busy helping with Convention which was in Guelph this year. Katelyn and I have both been busy attending 4-H shows as many of the achievement days are held in the first part of June. It is safe to say that every day is different and every day is exciting! 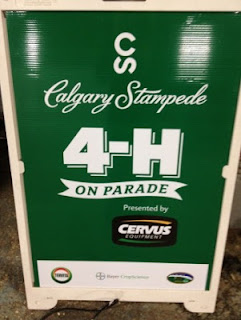 Since my last blog post I have been traveling all around and I have enjoyed every minute of it. The largest event that I was happy to be a part of was 4-H on Parade in Calgary.  I am one of the volunteers on this committee but the event fit nicely with some of my intern tasks. So I left Regina early in the morning on May 30 and arrived in Calgary in the late afternoon. I dropped into the office to restock some of my Angus swag and briefly catch up with everyone in the office. Things were busy as the office was preparing for Convention. 4-H on Parade started on Friday and it was an action packed weekend and ended with an extremely good sale. On Saturday, Katelyn came down to the event and together we presented to the cleaver kids and taught them a little more about the beef industry. That presentation was the most challenging for me. There was close to 50 kids and all under the age of nine. So they did not always want to pay attention and keep quiet. However, Katelyn and I had fun presenting together! 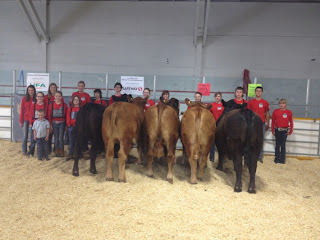 After 4-H on Parade was finished I headed home to Lougheed. I arranged for several school presentations in areas that where no further than 2 hours from my farm in Lougheed. On Monday, June 3, Katelyn and I attended the achievement day for our old clubs. I was one of the ringmasters for the steer show. It was nice to go back and visit my old club and meet the new members that had joined this year. Tuesday morning kicked off my school presentation week. Over my week at home I had the opportunity to talk to almost 300 kids. So this meant I needed many Angus goodie bags made up and many booklets folded. Thankfully my parents were more than happy to be folding booklets and making up goodie bags with me. I went to Macklin, Lloydminster, Wainwright, Lougheed and Sedgewick schools to make my presentations.  I have so much fun with the kids and they seemed to have fun with me!

After my week of school presentations I was asked if I would do a clinic about showmanship and grooming for a local 4-H club. June 9 I headed to Irma to give a clinic for the young 4-Hers. I had many questions and the kids seemed very keen on learning how to show properly. When I was done talking and doing some activities with the kids, we clipped many of the kid’s calves that needed a little extra help with the clipping. After this full day I was on the road to Spiritwood, Saskatchewan. Spiritwood is in the northern 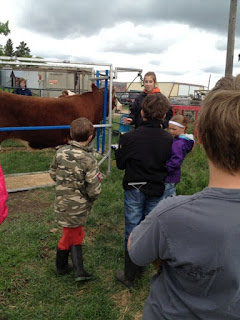 part of the province.  It was just about a five-hour drive but it is a much prettier drive then driving in southern Saskatchewan. I arrived at the nicest bed and breakfast. The couple that ran the B&B was the friendliest and the lady loved to bake sweets. I walked in and she was holding freshly baked, still warm red velvet cupcakes. The next day was the start of the Spiritwood Regional show. There were four clubs that got together to have this show. I was the ringmaster for the two days and also got to judge the stalls and booths. It is interesting for me to go to all these shows because everyone does things differently at the 4-H shows. In Spiritwood they make the kids participate in many different things. For example team judging, team grooming, a quiz and they have a jackpot show as well. The sale went very good and I would argue that the people of Spiritwood are the friendliest people I have come across in my travels so far! I stayed for the banquet and helped to hand out prizes and made sure that everyone who showed an Angus project got some Angus swag! Then I started my trip back to Lougheed. I have another show coming up on Monday then I am heading back to Regina. It will not be long after that and the Stampede will be here. Make sure you come and visit us in the Cattle Trail if you are planning to take in the festivities at the Calgary Stampede!